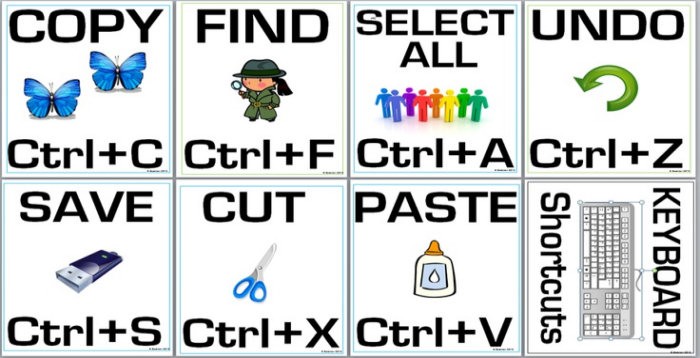 I’ve blogged about this previously, but I thought it would be a good idea to recap and consolidate the tips I previously gave, into a single post.

Three things that you often have to do when you’re writing on the computer are; copying text, cutting text and pasting the text you’ve just copied or cut. This usually requires lots of cursor movement using the mouse or touch pad. You can eliminate most of the cursor movement by using the following shortcuts.

Instead of clicking on a cut, copy or paste option from the menu (in Microsoft Word for example) hold down the Ctrl key and then press x, c or v. The shortcuts are as follows:

These shortcuts work is most places, not just Microsoft Word, and are extremely useful if there are no equivalent menu buttons. Typical places where they might be useful are:

The following shortcuts tend to be less well known than cut and paste ones, but they are just as useful.

And Some Lesser Known Shortcuts

This website uses cookies to improve your experience while you navigate through the website. Out of these, the cookies that are categorized as necessary are stored on your browser as they are essential for the working of basic functionalities of the website. We also use third-party cookies that help us analyze and understand how you use this website. These cookies will be stored in your browser only with your consent. You also have the option to opt-out of these cookies. But opting out of some of these cookies may affect your browsing experience.
Necessary Always Enabled
Necessary cookies are absolutely essential for the website to function properly. This category only includes cookies that ensures basic functionalities and security features of the website. These cookies do not store any personal information.
Non-necessary
Any cookies that may not be particularly necessary for the website to function and is used specifically to collect user personal data via analytics, ads, other embedded contents are termed as non-necessary cookies. It is mandatory to procure user consent prior to running these cookies on your website.
SAVE & ACCEPT
Back