The Apprentice – The Future of UK Business or Just Entertainment? 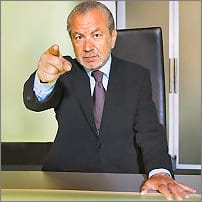 Yes we’re now in that part of the year where every week people tune into their TV’s to watch this year’s batch of budding “entrepreneurs” being put through their paces by that paragon of British business Allan, Sir Allen, Lord Sugar.

So is the Apprentice an educational programme teaching us how business should be done in the 21st century or is it simply another gimmicky reality TV programme?

Leaving aside the fact that many of the “contestants” are just wannabee media celebrities. Let’s consider the business methodology that Lord S espouses during his weekly “board room” (well actually a studio in West London) interrogations.

The process is simple (I call this the market trader business model).

1. Get a product for the lowest possible cost.

2. Market the product – in other words push it the faces of as many people as possible.

3. Sell as many units as possible at the highest possible margin.

The big emphasis of course is on Steps 2 and 3 – marketing and selling.

Now this simple business model has worked for centuries. It’s the model of the street market trader and it has served Lord S well. Lord S is extremely good at selling. He’s made a fortune from it. But actually, apart from a pile of cash, what has he achieved?

Amstrad was never a success. It wasn’t innovative like, for example Apple. It sold boxes using the business model described above. In 50 years time no one will remember Amstrad, or even Lord S, but we will look back on Microsoft, Apple, Google etc. in the same way that we look back on Ford or Marconi today. These companies have had a significant impact on the world.

The Apprentice, particularly Lord S, tries to force budding entrepreneurs into the straight jacket of the market trader business model. It may make them rich but it will not turn them into the future Bill Gates or Steve Jobs. For that we need people who can think for themselves, “outside the box”. People who will take risks. People who are happy to fail occasionally without hearing Lord S tell them “you’re fired”.

You've decided that you need a website for your business, or you've already got one that's looking decidedly long in the tooth. You  approach a web designer who tells you his company will design the coolest-looking site you could get. It will cost, or course, but it...

These days, most website developers use WordPress as a platform upon which to build their sites. The main reason for this is that WordPress is free to download and use. Also a wealth of add-on software exists in the form of plugins that can extend the capabilities of...

In recent years, WordPress has gradually become the ubiquitous website development platform for small to medium businesses. But along with its rise in popularity has grow an increasing population of hackers intent on breaking into it.  A WordPress-based website...